Ukraine and Sweden are the most mature European markets when it comes to central bank-backed digital currencies – touted globally as the future of money, and the more credible alternative to well-known cryptocurrencies as Bitcoin.

The stellar rise of Bitcoin, Ethereum and other cryptocurrencies has put the global financial structure at risk – helped along by a devaluing, cash-backed dollar. At risk of losing control to a sea of private – and unregulated – digital currencies, as many as 60 central banks globally are developing their own digital tokens with ‘official’ status.

In a new report, experts from PwC produced a first-of-its-kind benchmark of retail-focused digital currencies, sourcing central bank websites and other sources such as the Atlantic Council, the press and Google trends to gain insight in the different coins available and the maturity of these coins. 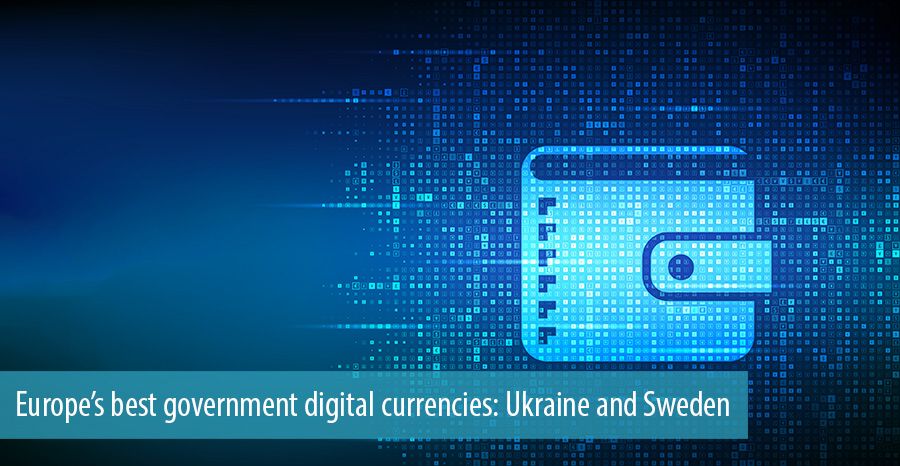 Out of this analysis came an interesting finding: Europe’s most advanced digital currencies are not be found in the largest economies of the UK, Germany or France, but in Ukraine and Sweden, who are lauded for how their government-backed cryptocurrencies are making a mark among consumers and in the economy.

Ukraine’s ‘E-hryvnia’ is Europe’s most mature digital currency. The coin was launched by the National Bank of Ukraine in September 2018, and was piloted in December of the same year with nearly 5,500 tokens.

“The project included a test on distributed ledgers, formulating a provisional framework and regulations, establishing a temporary accounting model, and the study of various aspects from the impact on macroeconomic stability to the legal position of CBDC issuance and circulation,” explained Pauline Adam-Kalfon, a partner at PwC and one of the report’s authors.

The technology proved to be more than adequate to support scaled distribution, and the government is currently working on a “technically feasible” nationwide launch that wouldn’t destabilise the financial system.

Ranking second in Europe, and eight worldwide according to PwC: Sweden’s Riksbank has been researching a potential ‘e-krona’ since 2019, building on an already strong base of digital finance. Less than 10% of payments in the country are made with cash, and six of the country’s banks have been running a common digital payments app – Swish – since 2012.

“In December 2019 the Riksbank tested e-wallets, distributed ledger technology, and levels of interoperability across participant banks. Following this, the Riksbank proposed that the Riksdag, the Swedish parliament, review the concept of legal tender to grant the central bank more control over money,” explained Benoit Sureau, a partner at PwC and an expert in blockchain.

The e-krona was piloted in 2020, and ongoing feasibility studies are due for completion in late 2022. Riksbank called in global professional services firm Accenture in January 2020 to help design the consumer-facing features of the proposed e-krona. “To date, Sweden has provided the highest level of technical insight into its digital currency project,” said Sureau.

Other countries that rank in the top 10 of the digital currencies report are – in order – Bahamas, Cambodia, China, Uruguay, Ecuador, Eastern Caribbean, South Korea and Turkey.

According to the study, developing economies dominate the central bank-backed digital currencies landscape due to the financial inclusivity that comes with the new currencies. “The general public will be one of the biggest beneficiaries of digital coins as it will give them access for the first time to a digital form of central bank money. And that is a big milestone in the evolution of money,” explained PwC partner and global crypto lead Henri Arslanian.

“Central bank-backed digital currencies are direct alternative solutions to further financial inclusion efforts by public authorities. As sovereign digital cash, they can contribute to modernise the current monetary system but also help to bridge the gap with the unbanked,” concluded Adam-Kalfon.

Meanwhile, in the wholesale segment, maturity of coins is led by Thailand, Hong Kong, Singapore, Canada, the UK, France, South Africa, Europe, the UAE and Japan.

Stellar may be on the brink of a 50% collapse

XLM price trades to a different tune as it tries to sustain price above a symmetrical triangle’s lower trend...

Can any of the perspective altcoins outperform the rise of Bitcoin (BTC)?

The Stellar Development Foundation is more focused on building its protocol than the market conditions, said the organization’s Senior...

About $7.65 billion entered the cryptocurrency market in just three hours via a widely unknown altcoin on Monday.Dubbed as...

Supported by MicroStrategy’s bid to buy Bitcoin, the coin finally breached the $40,000 mark during the early hours of...