At the time of this writing, LTC’s price is down $-0.44 (-0.27%) from the hour prior. The hourly chart shows that LTC has seen 3 straight down hours. As for the trend on the hourly timeframe, we see the clearest trend on the 20 hour timeframe. The moving averages on the hourly timeframe suggest a choppiness in price, as the 20, 50, 100 and 200 are all in a mixed alignment — meaning the trend across timeframes is inconsistent, indicating a potential opportunity for rangebound traders.

167.1 (USD) was the opening price of the day for Litecoin, resulting in yesterday being one in which price moved up 0.34% ($0.56) from yesterday. This move happened on lower volume, as yesterday’s volume was down 19.38% from the day before — and down 35.08% from the same day the week before. Relative to other instruments in the Top Cryptos asset class, Litecoin ranked 3rd since yesterday in terms of percentage price change. Here is a daily price chart of Litecoin. 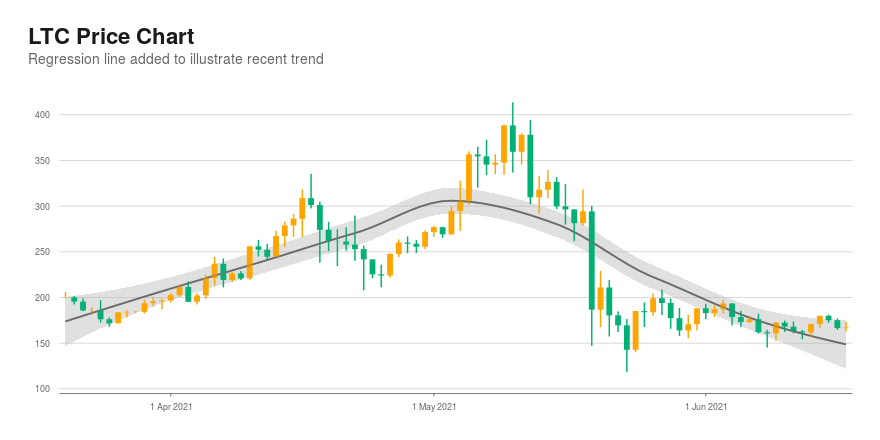 The first thing we should note is that the current price of Litecoin is sitting close to its 20 day moving averages; moving average crosses often indicate a change in momentum, so this may be worth keeping an eye on. Volatility for Litecoin has been contracting over the past two weeks relative to volatility over the past month. Whether volatility reverts will be something to watch. For another vantage point, consider that Litecoin’s price has gone down 6 of the previous 10 trading days. As for those who trade off of candlesticks, we should note that we’re seeing pin bar pattern appearing here.

Behold! Here are the top tweets related to Litecoin: