Bitcoin (BTC) price touched highs of $50,505 for the first time since May on Aug. 23, a signal that the bull market was fast approaching its second leg. Bitcoin took the lead higher on bullish PayPal’s news that U.K. clients will be able to make crypto transactions.

Another positive news on the radar is that of Iran, which is on the brink of the reversal of its mining ban. According to a report by Iran’s Financial Tribune, Tavanir, the country’s power generation organization, Iran will once again allow Bitcoin and crypto Miners to operate in the country from the last week of September. Iran’s government banned Bitcoin (BTC) and crypto mining operations back in May. At the time, the decision was reportedly made to prevent Miners from overburdening the grid during the hot summer months.

Notably, projects with a focus on non-fungible tokens (NFTs) were the leading Altcoin gainers for the day as the trading volume of NFT tokens rose. This follows on the news of credit card giant, Visa making a sizable investment in the NFT space to acquire a popular digitally pixelated CryptoPunk. Visa had purchased CryptoPunk 7610 — a female figure with a mohawk, clown green eyes, and lipstick — which was first claimed back on June 23, 2017, and initially sold a month later for 0.6 Ether (ETH) ($114 at the time).

The top performer on a 24-hour basis is WAX (WAXP), a delegated proof-of-stake (DPoS) blockchain protocol that claims to offer the world’s most proven and eco-friendly blockchain for NFTs, video games, and collectibles. WAXP rose from lows of $0.182 after the news of its Binance listing to highs of $0.499 on August 23rd, gaining nearly 174%.

Multiple sources have revealed that Binance is considering raising investment from government funds at a valuation of $200 Billion which is expected to have an impact on BNB price. Monero’s price is climbing amid recent developments among which is an upcoming P2P mining pool ready for testing next week. aelf (ELF) rose from lows of $0.304 to reach highs of $0.446 on August 23, gaining nearly 45%. aelf will be set to initiate its official Mainnet Token Swap in September 2021.

On-chain Santiment speaks on the Bitcoin climb, hinting at a surge in development activity:

”Bitcoin has broken a market value of $50,000 for the first time since May 14th, and it’s coinciding with the biggest increase in development activity… also since May. If #github submissions continue pushing higher here, it will be a promising sign” 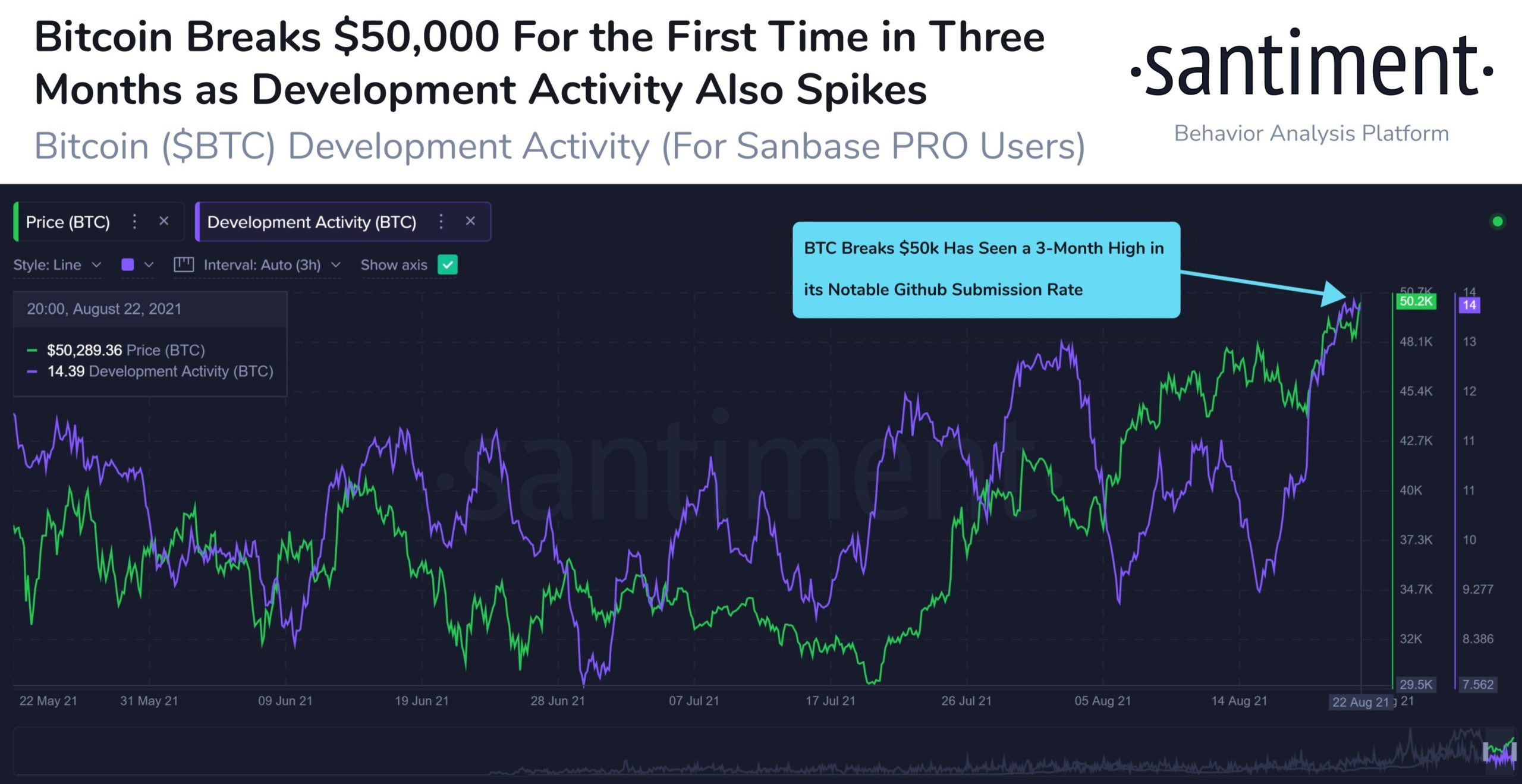 Cryptoquant shared an insight by one of its analysts who goes by the Twitter name, darek_sc on 5 reasons why Bitcoin price recovered after its crash to $28k:

1. After China ban mining we observed slowly Hashrate recovery.
2. Weak hands sold Bitcoin at a loss. Fear and Greed index shows that people were in extreme fear and nobody want to buy Bitcoin.
3. Short squeeze on futures market 21-26 July.
4. BTC: All Exchanges show massive buying after short squeeze (21-26.07).
5. BTC Miners are lowering sales pressure from May 17.
Short-term prediction -> retest price range between $48-49k and then goes up over $51k then generate new HL and HH -> 57k.