When online communities decided to celebrate El Salvador’s Bitcoin Day by buying $30 worth of Bitcoin (CCC:BTC-USD) on Sept. 7, Dogecoin (CCC:DOGE-USD) fans might have felt a sense of déjà vu. A similar grassroots initiative created a #Dogeday holiday in April to commemorate… well… nothing in particular.

And sure enough, crypto prices saw the same old story.

As retail investors loaded up on cryptocurrency, others used the opportunity to take profits. The ensuing “flash crash” would wipe billions off of crypto valuations; at one point, Bitcoin had shed -17% of its value.

In a sense, this portends what El Salvador has in store. It’s one thing to buy Bitcoin for profit; it’s entirely another to hitch your country’s monetary policy to an uncontrollably volatile asset. But strongmen leaders have done stranger things before. And who knows… perhaps this economic experiment might one day help one of Central America’s poorest economies claw its way to success.

Happy B-Day to You, El Salvador!

AMC Entertainment (NYSE:AMC). Shares of this meme favorite once again spiked following a record-breaking Labor Day weekend at the box office. Perhaps GameStop (NYSE:GME) might see the same luck once Half-Life 2: Episode Three gets made someday.

IPO Market. The lull in the summer IPO market looks ready to end with Warby Parker, Reddit and Discord all potentially listing sometime this year.

Coinbase (NASDAQ:COIN). Shares dipped after the Securities and Exchange Commission sued the cryptocurrency exchange over a lending program. Coinbase retorted by accusing the SEC of “sketchy behavior.” One hopes that COIN’s legal defense strategy gets revisited before the court date.

The Next Cardano Is Already Here (Part 2)

A week ago, I wrote about three cryptos set to become the “Next Cardano.” Fast forward to today and all three — Solana (CCC:SOL-USD), Internet Computer (CCC:ICP-USD) and Terra (CCC:LUNA-USD) — have outperformed the world’s third-largest crypto over the past week. 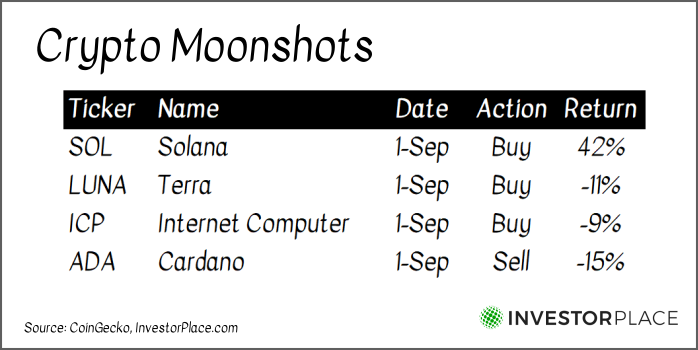 Solana deserves a special mention. On Tuesday, the understated cryptocurrency overtook Dogecoin to become the world’s seventh-largest coin; SOL is now worth almost $50 billion. Not bad for an asset that’s unavailable on Robinhood (NASDAQ:HOOD) and shares an acronym with “Sh*t Outta Luck.”

The cryptocurrency’s rise reflects the growing resurgence of NFTs, the blockchain-stored deeds that track ownership of digital goods. Unlike Ethereum’s (CCC:ETH-USD) high GAS fees (reaching nearly $60 during the NFT boom earlier this year), Solana’s streamlined protocol means transactions can cost as little as $0.00025. And its smaller market cap means SOL has far more upside than other coins of its class.

That’s why I added SOL to my “buy” list last week and why it remains as a top pick.

Position sizing is still important, however. Solana’s 50% rise means that anyone who bought SOL, ICP, and LUNA in equal one-third portions now sits on an unbalanced position. To even up positions, quality-minded investors should convert some of their holdings into ICP, LUNA or cash while they can.

Essentially, investors need to protect themselves from an overheating market. Consider these recent newsmakers:

As NFT projects (and valuations) become increasingly ridiculous, investors need to step off the Rising Stars gas pedal and be sure to take some profits along the way.

If cryptocurrencies were a theme park ride, conservative investors would have lost their lunch this week. On Tuesday, the prices of Dogecoin and XRP (CCC:XRP-USD) both dropped 20% in less than an hour.

Financial historians will doubtlessly point to some combination of investor panic and programmatic trading as the cause. These culprits were behind scares such as 1987’s Black Monday and 2010’s flash crash.

But there’s also a simpler explanation when it comes to crypto: high financial leverage.

Unlike stocks, cryptocurrencies have few rules against margin trading. Investors can borrow 100x or more to buy Bitcoin and other cryptos. Only exchange limits (and common sense) stop people from taking even greater risks.

That’s why few should be surprised that Uniswap (CCC:UNI-USD), PancakeSwap (CCC:CAKE-USD) and Binance (CCC:BNB-USD) all took such extreme tumbles when Bitcoin dipped 17% on Monday. The three currencies underpin much of the programmatic trading in tokens and other speculative cryptos — the blockchain versions of hedge fund clearinghouses (smart investors should use this rare opportunity to load up on these high-quality cryptocurrencies).

Other altcoins were also caught in the crossfire. As many traders discover, losses in one position can force people to sell shares in another to meet margin requirements. It’s a process that El Salvadorians might end up calling “Tuesday.”

Bottom line: cryptocurrencies are volatile, and investors need to selectively use dips to buy traditionally high-priced cryptos like Uniswap, PancakeSwap and Binance Token.

The future of solar power isn’t solar, according to Eric Fry. Here’s why one of InvestorPlace’s chief editors believes we need to look further afield to battery stocks.

Are magic mushrooms the new pot? Luke Lango takes a look into the fast-growing world of psychedelics and argues why one company seems best-poised to win.

The resurgence of Covid-19 cases has sent shares of vaccine makers higher. One underrated firm could surprise investors, according to David Moadel.

And finally, if you’re looking to buy a generator for the next hurricane season, you aren’t alone. Louis Navellier writes on why a home generator company could give Tesla (NASDAQ:TSLA) a run for its money.

The Great Bitcoin Experiment Is Underway

The President of El Salvador announced in June 2021 that his country would accept Bitcoin as legal tender. Crypto enthusiasts cheered. The 40-year-old Nayib Bukele seemed to be living up to his self-proclaimed title as the “coolest president in the world” (a moniker I incidentally gave myself in third grade).

Meanwhile, skeptics might have thought it was all a big joke. Mr. Bukele — widely seen as authoritarian by Western states — has created such a polished online persona that it’s sometimes hard to separate truth from Instagrammed fiction.

Yet here we are. El Salvador leapfrogged the rest of the world to adopt Bitcoin as legal tender; its government now owns 550 BTC and mandated in Article 7 that all businesses must now accept the cryptocurrency.

In a sense, using Bitcoin was (and still is) a publicity stunt. Stablecoins like Tether (CCC:USDT-USD) and USD Coin (CCC:USDC-USD) would have given the El Salvadorian economy a less-volatile token while modernizing its financial system. More efficient coins from Solana to Terra would have provided its citizens with lower-cost transactions.

But right or wrong, El Salvador is embarking on one of the greatest crypto experiments yet. And the world will be watching closely.

Thomas Yeung is an expert when it comes to finding fast-paced growth opportunities on Reddit. He recommended Dogecoin before it skyrocketed over 8,000%, Ripple before it flew up more than 480% and Cardano before it soared 460%. Now, in a new report, he’s naming 17 of his favorite Reddit penny stocks. Claim your FREE COPY here!

On the date of publication, Tom Yeung did not have (either directly or indirectly) any positions in the securities mentioned in this article.

Tom Yeung, CFA, is a registered investment advisor on a mission to bring simplicity to the world of investing.

Read More: Looking for the Next Cardano? Buy This Moonshot Crypto Now

What you need to know about Stablecoins – Catching News

There are many different coins and each of them have their own purpose. People invest into these projects and...

ATOM could soon fly after the Forte partnership

The Cosmos (ATOM) price popped on Tuesday after the developers announced a partnership with Forte. The ATOM price rose...

One popular crypto trader says three altcoins are ready to make their move while Dogecoin (DOGE) is hesitant to...

The Columbus 5 upgrade has attracted decentralized application projects to the Terra ecosystem, and new developments are lined up....

October has been a strong month for cryptocurrencies like bitcoin but a number of decentralized finance (defi) tokens have...

Circle announced today the launch of its trademark stablecoin USDC on top of the Hedera network. This action is...

Ethereum price must crack this key level before exploding toward $6,400

Ethereum price has presented a buying opportunity with a targeted move of 60%.  However, ETH is met with a...