August has brought a sense of relief to the crypto market, with crypto bellwether Bitcoin regaining some of its losses in the past three months. The crypto market has retested the $2 trillion mark, with several crypto assets posting new highs.

In the past week, DOT has surged 11.23% in an unprecedented turn of events. Polkadot has also participated after seeing its value slashed by half during the three months’ bearish tide. This article points out the blockchain protocol’s potentials and if this is a sign to buy DOT before it becomes the next Ethereum. 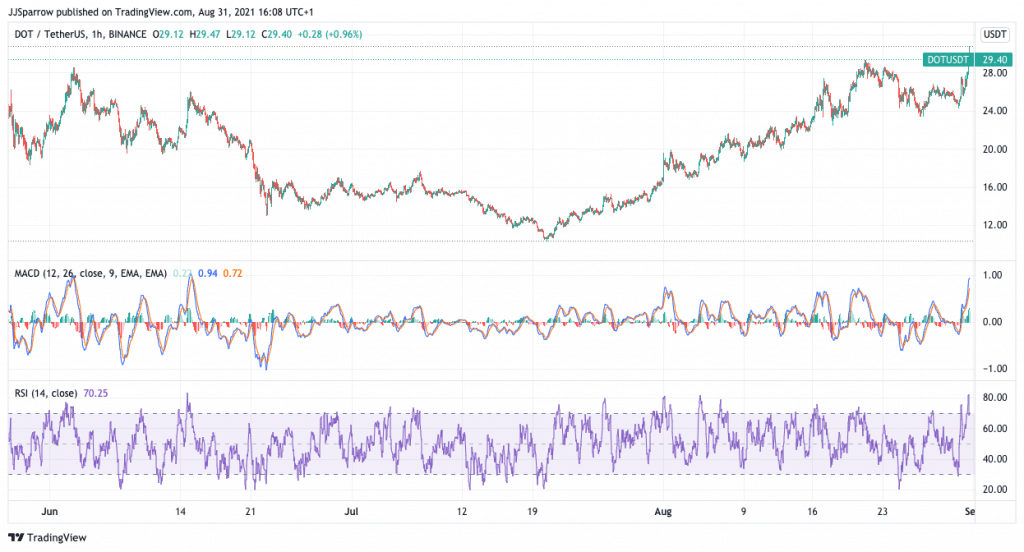 Like several Ethereum killers, Polkadot set out to address key issues in the blockchain ecosystem, especially the lapses popular decentralized applications (dapps) facilitator has shown since launching in 2015.

Founded by Dr. Gavin Wood, Polkadot, like Cardano, has a long history with Ethereum as Wood was one of the founding members of the Ethereum network. Following Ethereum’s failure to abandon the proof-of-work (PoW) mining protocol and migrate to a proof-of-stake (PoS) consensus algorithm, Wood struck out and founded Polkadot.

According to the development team, Polkadot is creating an interoperable blockchain platform where several protocols can transfer any form of data or asset types, not just tokens only. It’s an open-sourced sharding multichain protocol that is heterogeneous and aims to address the scalability issues that have plagued the Ethereum network.

To achieve this aim, Polkadot is built in a particularly unusual manner with four core components. The Relay Chain serves as the “heart” of the protocol, and it enables the Polkadot network to maintain consensus, interoperability and shared security systems.

Parachains are independent blockchains that leverage Polkadot’s world-class security while operating their separate tokens and can be used for specific use cases.

Parathreads work more or less the same but are generally based on a pay-as-you-go (PAYG) basis, enabling flexibility of leaving the Polkadot protocol.

The last in the complex Polkadot protocol are bridges connecting parachains and parathreads with external networks like Ethereum and Cardano. Like several protocols, Polkadot uses its utility token DOT to provide network governance and operations and bonding.

In the race to replace Ethereum, Polkadot has been the slowest.

Others like Cardano and Solana have posted massive highs this past month, with Cardano replacing long-term third digital asset Binance Coin as the third most valuable cryptocurrency. At the same time, Solana broke into the top ten after hitting highs of $130.

Polkadot has struggled to break above the $50 mark even those the crypto market has been on an extended bull run for most of the month. However, the project has recently found its feet and is out to make a statement. A crucial weakness of the protocol is the lack of community engagement.

DOT is up 24.85% at press time, trading at $30.65 in the last 24 hours. DOT’s one-week gain is also promising as the digital asset is up 11.23% in a market largely characterized by wild price swings. Going for a bargain at the moment, the virtual currency’s recent rally should serve as a signal to buy DOT before it becomes out of reach.

On the trading chart, DOT is showing strong bullish potential.

The utility token is trading above the short-term 20-day moving average (MA) indicator at $25.31. If the bulls continue to hold sway, which is likely, DOT should head towards the $35 mark in the coming days while finding support at $25 in the event of a market downturn.

Polkadot has seen little activity with the network focusing on its upcoming parachain auctions on the fundamental front.

In a recent release, the multichain protocol is gearing up to begin its parachain auctions after kick-starting its crowd loan facility.

This will see several blockchain protocols bid for a space on the Polkadot network. Its sister protocol, Kusama network, is currently on parachain auctions and has approved five.

Based in the UK, Jimmy is an economic researcher with outstanding hands-on and heads-on experience in Macroeconomic finance analysis, forecasting and planning. He has honed his skills having worked cross-continental as a finance analyst, which gives him inter-cultural experience. He currently has a strong passion for regulation and macroeconomic trends as it allows him peek under the global bonnet to see how the world works.

By Nigel Green Oct 7, 2021Share this article:ShareTweetShareShareShareEmailShareBitcoin could hit fresh all-time highs of $100 000 (R1.4 million) by...

Cardano, Polkadot and Four Additional Altcoins Are Set To Explode in 2022,

Analysts affirm Cardano will outperform Bitcoin and Ethereum given ADA’s

The Africa Special event aired on Thursday, showcasing Cardano developments on the continent. At the time of writing, the...

Searching for a crypto ETF? Pure crypto ETFs that invest solely in crypto are thin on the ground. And...