The Stellar cryptocurrency was developed by the Stellar foundation used to trade between the Stellar networks. The Stellar with the native name ‘Lumen’ is used for trading as XLM. Due to the popularity of being a cross-border transfer and payment system, Lumen is considered one of the best performing altcoins due to its aim of developing economies by reducing transaction cost and time lags of transfer.

As per the recent data, Stellar is trading at a market cap of around $6,466,062,527. The circulating supply is spotted of 23.75 billion XLM coins. The chart shows that sudden downfall created a bullish engulfing green candle, indicating a tug war between bulls and bears. Bulls are on track with a green sign, which is a good sign for Stellar traders worldwide.

In the month range of August to September, it has created a bearish triple top pattern, which interrupted the uptrend and eventually hit the resistance. Then, it changed the direction to a downtrend, and the XLM price fell back to its area of support. The legal tender announcement of Bitcoin by EI Salvador made the entire crypto range into a plunge, which is also reflected in Stellar. On September 07, Stellar fell from its near-time swing high of $0.4241 to $0.3319.

After the worst fall of May 19 on the crypto market created the Stellar to end up with a short-term low of $0.201 which broken all the support. The long bearish engulfing candle has initiated the downward movement, which went up to the range of $0.2561 swing low. After the downtrend, the Doji on the technical chart created a slow rise in XLM, but the fastest transacting crypto cannot sustain its momentum. During the last week of September, Stellar has made a loss of around 9.29% for traders, followed by a decline of around 18.95% for the previous month.

Even though daily candlestick has formed green for the last two days, Stellar will find it difficult to continue the uptrend for the year due to the global volatility and economic conditions. European markets are up, but the US market and NASDAQ seem highly volatile, which also creates volatility in the crypto market. If Stellar price can sustain its momentum, this can create a high of $0.343887 in the near term. XLM needs to get a good momentum to reach its cautious resistance level of $0.4186.

However, as per technical setup, expecting Stellar to trade within the range of $0.2557671 to $0.4686750 for the upcoming months, if there are no positive announcements come in the crypto market, traders cannot expect a bullish momentum beyond this range. Till now, the technical setup has not been the path of a long-term bullish momentum.

Any bad news or volatility of the cryptocurrency market can create a pullback to the nearby support at any time. The chart set up is just a retracement until the next resistance range and can continue until the price of $0.308211 resistance range. Beyond which can expect an uptrend till the significant resistance.

The technical indicator set up is neutral MACD is about to cross the signal line. If MACD crosses the signal for the coming two trading sections, then stellar can get a relief that bulls have taken over the market. Relative Strenght Index is just entered into the buying zone of 41. But a clear-cut buy can be expected only after the bullish momentum is sustained as per Stellar Lumens price prediction. 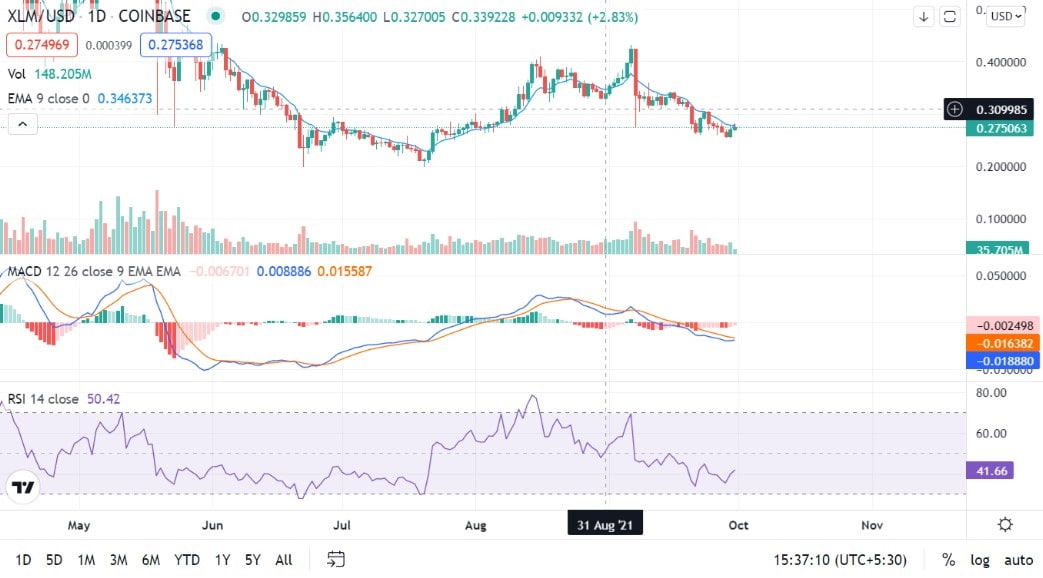 The 15 minutes candle chart shows that Stellar has a parallel downward channel, a steep rise. After that, a slow parallel channel continuous downfall is not taken as a good sign. Stellar experienced a huge amount of volatility in the market bulls that cannot be sustained on intraday. The Bollinger bands are squeezing for the current trading session. Traders can watch the next resistance level as mentioned in the analysis and should be cautious on any downfall after that. 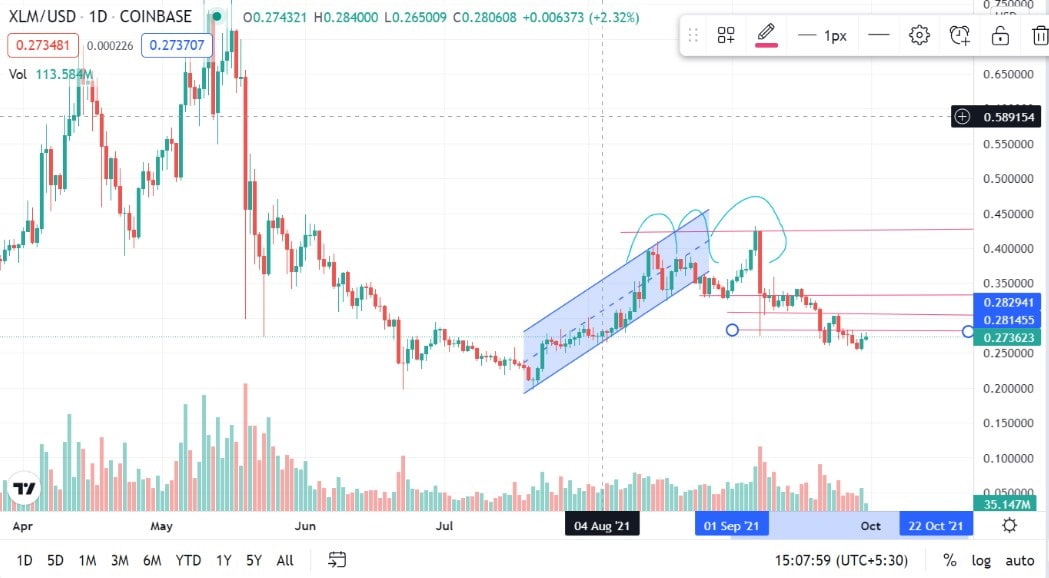 XLM vs SHIB: which coin is better to invest in the next 3 months?

Some tokens have risen in price several times since this year and brought good returns to investors. For instance,...

United States cryptocurrency exchange Coinbase has announced that it is giving away 1 billion Stellar Lumens (XLM) (about $106...

Throughout much of 2021, cryptocurrencies have proved unstoppable. The world's largest digital currency, Bitcoin, has nearly doubled in value...

Stellar is a network aimed at helping money transfers among parties, such as mainstream financial entities. Stellar has its...

Cryptocurrency protocol Stellar (XLM) announced that it intends to remove its inflation feature in an upcoming upgrade.According to the...