DOT could correct to $40

Polkadot price faces drop to $40 to test as support

Polkadot price action has been extremely bullish, but it’s time for the bulls to show their conviction. Since the close of the October 15th weekly candlestick above the Cloud, a significant gap between the weekly Tenkan-Sen has existed. Because those gaps do not last long, and because price has extended even further from the Tenkan-Sen, it is increasingly probable that closure of that gap is coming soon – and the weekend is a perfect time for such a move to occur.

The weekly Tenkan-Sen and the top of the Cloud (Senkou Span B) share the same $40 value area. Because of that shared price level, Polkadot price should find many buyers at that level. Additionally, the upper portion of a high volume node in the 2021 Volume Profile is there as well. If the bulls defend $40 as support, then another leg higher towards new all-time highs will begin. 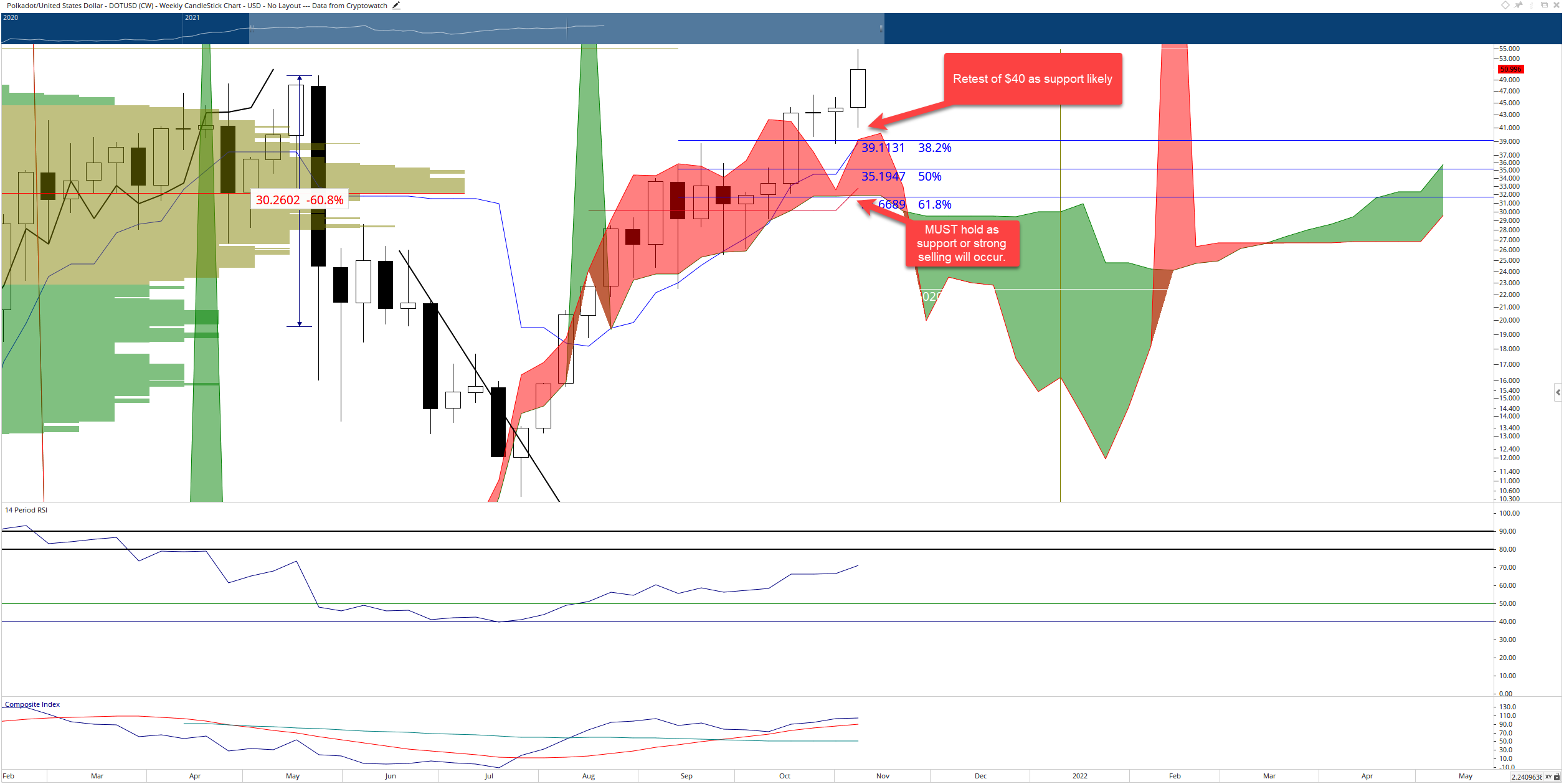 The following primary support level to watch is at $32. $32 is easily the most substantial price level on the weekly chart as it contains the 2021 Volume Point Of Control, the weekly Kijun-Sen, and the bottom of the Cloud (Senkou Span A). While $32 is strong, bulls should be cautious of any push over the weekend that could extend a Polkadot price close below the Cloud. A close at or below $31 could trigger some responsive selling in the form of a stop run.

Read More: DOT could correct to $40

In an exclusive interview with CryptoSlate, the creators of Kusama Kings talk about the issues with minting NFTs, utilizing...

5 Web 3.0 Cryptos to Buy for the Future of the Internet

The internet is moving to the blockchain, there’s no doubt about it. Investors have seen the impact of putting...

Millions of gamers and creators will tap into opportunities to generate cryptocurrency earnings in play-to-earn games and other virtual...

After another unsuccessful attempt to overcome $59,000, bitcoin slumped by a few thousand dollars to $56,000. Most alts have...

7 of the Best Altcoins to Buy

Bitcoin isn’t the only crypto game in town. Bitcoin (BTC) typically gets the lion’s share of cryptocurrency media coverage,...

What happened Three leading altcoins, Tezos (CRYPTO:XTZ), Algorand (CRYPTO:ALGO), and Polkadot (CRYPTO:DOT), were among the biggest winners in the crypto markets today. As...